Key investment opportunities in Oil and Gas sector of Mongolia

The key to successful exploration in Mongolia is to identify deeper sub-basins within the major rift trends where lacustrine source rocks developed and were later buried deeply enough to achieve thermal maturation and petroleum expulsion. Structure identified around these sub-basins with favorable reservoir and trapping conditions have produced oil in the eastern Gobi basin (Zuunbayan and Tsagaan-els) and in the Tamtsag basin (Toson-uul and Tamsag), and within the Hailar and Erlian basins in China.

Promote and protect investment for oil industry under Government Authority.

According to the Customs Tariff Law and Value –Added Tax (VAT) Law of Mongolia, a contractor and /or a sub – contractor will exempt from Customs duty and VAT during first five years of operation for “imported equipment, facilities, materials, raw materials, appliances, spares, chemical and explosive materials, and special machines and techniques which will be used for petroleum and unconventional oil operation.

Familiar to the neighboring China, the tectonic history of Mongolia is one of the prolonged accretions, however; series of 59 narrow Mesozoic basins and/or sub-basins in the western, southern, and eastern part of the country have been recognized up to date. During a period of rift basin development and rapid subsidence occurred in the Late Jurassic to Early Cretaceous, source rocks with excellent quality are widely distributed in these Mesozoic basins where the major petroleum potential is regarded as lying within its rift basins.

According to the estimation of Exploration Associates International of Texas Inc. in 1990, the geology resources of crude oil in the Mesozoic sedimentary basins hold a potential of 10% probability 2,607 million bbl., with a 50% probability of 1,031 (Tamsag, Choibalsan, Dornogobi, Nyalga, Umnugobi, Dundgobi, Gashuun, Gobi-Altai, South Altai and back Altai, Great lakes, Lakes basin) million bbl., and a 95% probability of 344 million bbl. 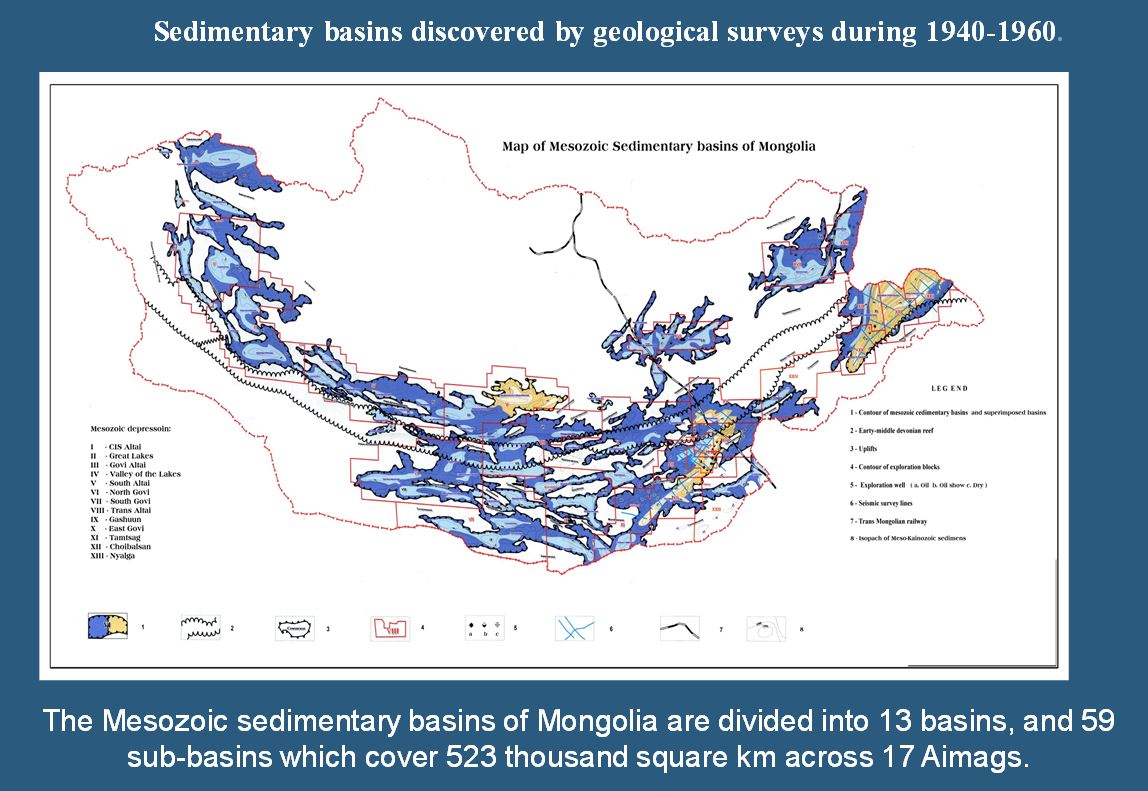 A total of fifty-nine (59) basins and/or sub-basins covering an area of 523 thousand sq.km across 17 provinces have been grouped into thirteen (13) basin systems with similar geographic and geologic affinities. Furthermore, thirty-two (33) petroleum exploration blocks have been defined by the MRPAM. So far twenty-seven (27) Production Sharing Contracts have been signed, of which two (2) PSCs were cancelled. Currently there are twenty-one (21) foreign companies from seven (7) countries implementing twenty-three (23) active PSCs and two (2) PSCs are under the consideration of cancellation process. Other three (3) are still under negotiation and the remaining three (3) are open, two (2) of which are currently available for Open Bidding round.

In Total, 21 Contractor companies are conducting petroleum exploration and production activities, on 25 exploration blocks. Those companies are headquartered in: Mongolia (28,5%), China (28,7%) others including Canada, Switzerland and Australia.
According to Production sharing contracts, an area of 272890km2 was explored through a regional gravity survey, at a scale of 1:200000 between 1993 and 2016. 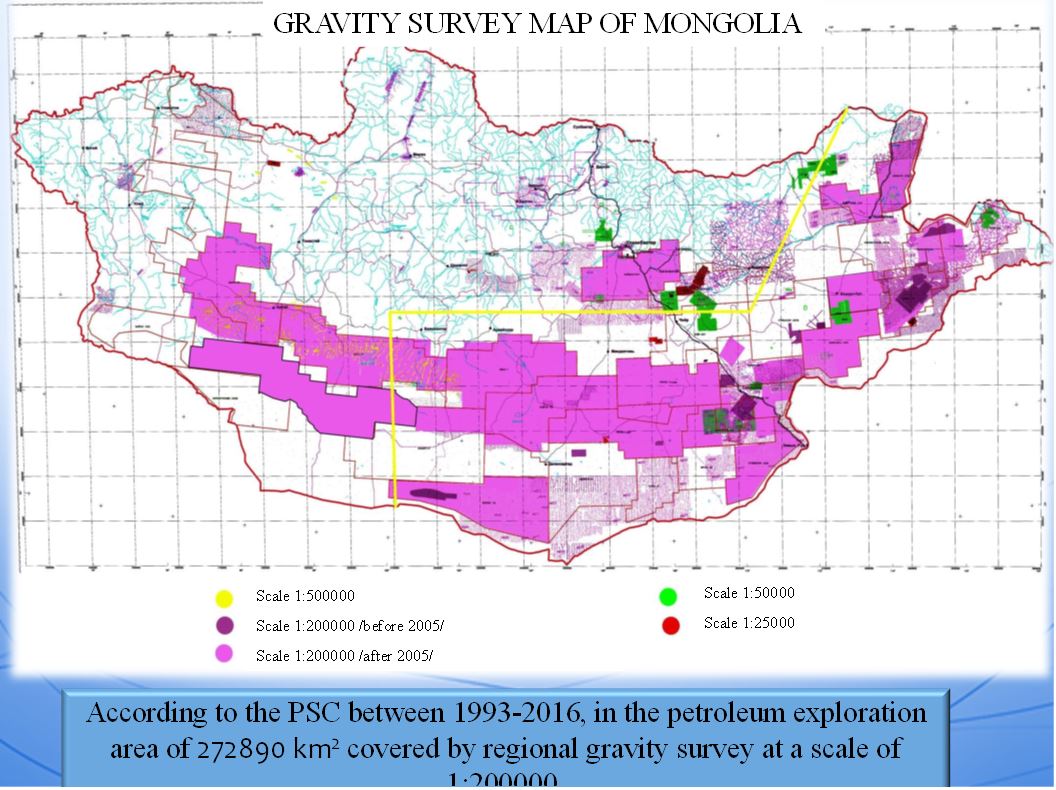 Additionally, a magnetic survey was conducted over area of 77630km2 as well as a passive seismic survey on 210 physical points and a full tensor gradiometric FTG survey in a line of 21990km.  Furthermore, 33494km of 2D seismic work and 6273.9 km2 of 3D seismic works were conducted. As a result, a total of 1537 wells were drilled for exploration, appraisal & production facilitated by an investment of 3.45 billion US dollars. 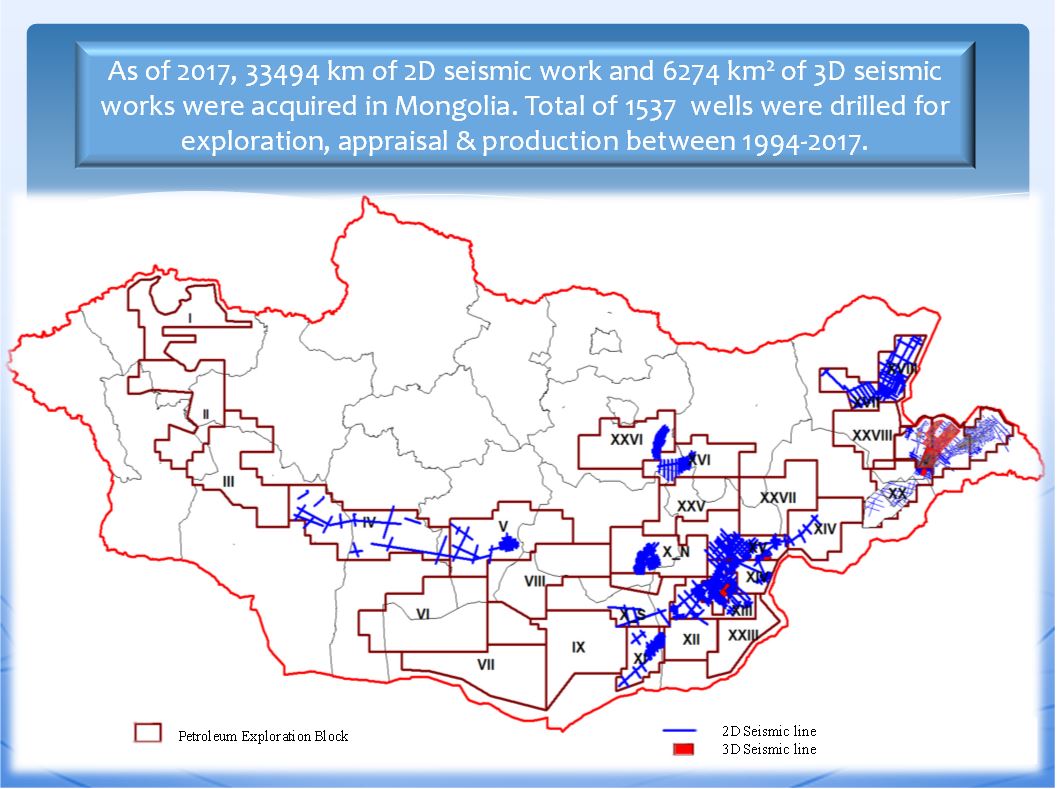 As of 2016, the exploration block of Galba XI has been drilled, with 14 wells - from which there are identified 11 wells with trace yields, and three wells with ‘fair’ oil prospects.   In this block, it is established that three structures possess potential for oil reserves and from them could produce 15717m3 of oil. This estimation of oil reserves is rated at 300X104 ton in area of 3.6km2. From the three developed wells in the exploration block of Khukh nuu, there was a total of 35.2m3 of oil produced.

Oil exploration and potential reserves (in 3 fields under production) 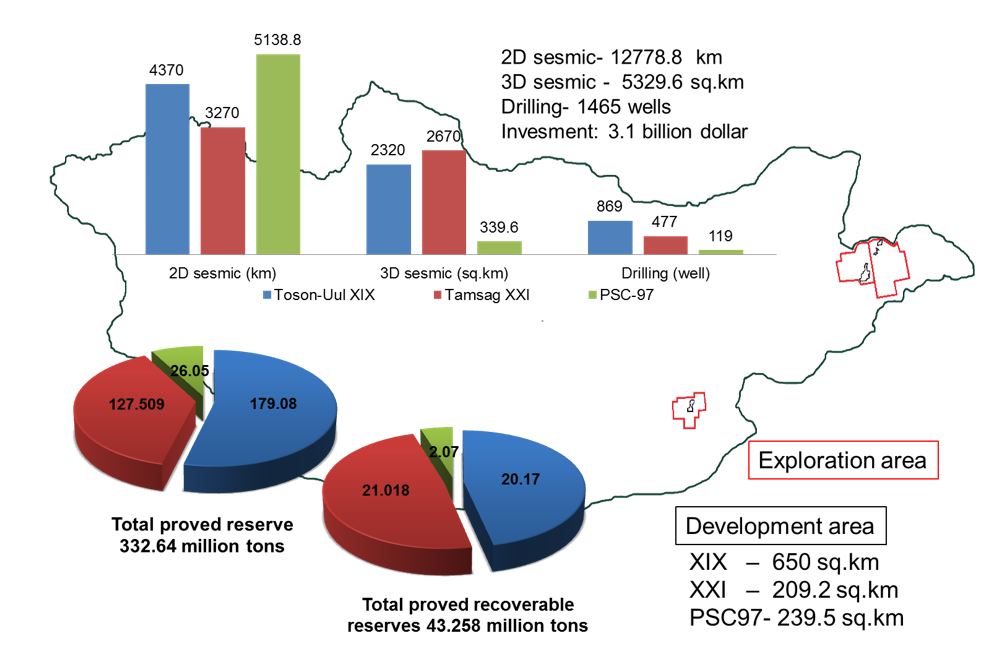 Oil production, export and revenue generated in the national budget

Taxes, fees and charges paid to central and local governments

Oil production companies such as Petro China Daqing Tamsag and Dongsheng Petroleum (Mongol) LLCs paid US$ 3.41 million in tax and US$ 54.31 million in royalties in 1993-2015.

Taxes, fees/royalties and charges paid by oil producers to central and local governments

Investment in the oil sector

Oil production companies such as Petro China Daqing Tamsag and Dongsheng Petroleum (Mongol) LLCs invested US$ 2.83 billion in 1993-2015 and planned US$ 441.9 million investment in 2016.

Gasoline and diesel fuel imports rose 10% per annum between 2006 to 2013. Imports have fallen in the past two years due to the recession. Imports of A-80 (RON) lead gasoline have fallen year on year, while imports of A-92 (RON) unleaded fuel have increased. Imports of diesel fuel have been unstable, having both both risen and fallen in the past year. Diesel consumption has recently fell because of the plummeting global copper and coal prices and varying mining operations; but the expected trend is for a long-term rise in consumption.

In the past 5 years, Mongolia’s petroleum consumption has risen 66% while the number of vehicles has risen 53% (according to the vehicle registry).